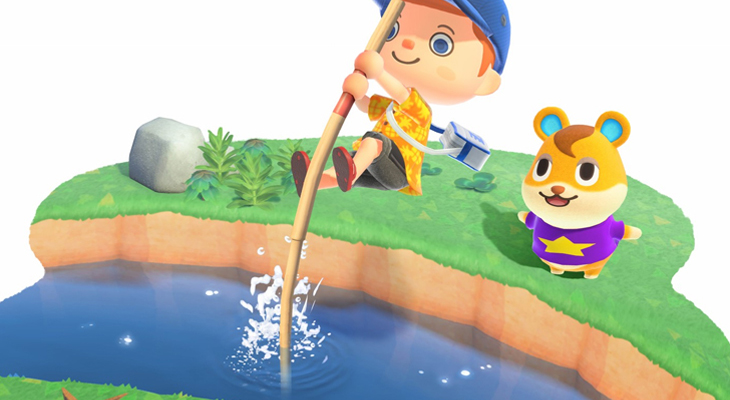 With the September Nintendo direct showing off a new trailer for Animal Crossing: New Horizons, we now have alot of new information including new features never seen before in the series.

Nintendo have brought back grass patterns which can be seen by the triangle pattern in the trailer. In the E3 trailer, the pattern wasn't as prominent and didn't cover all of the grass. The series has always had a unique grass pattern assigned to your town when you start the game that covered all of the grass. Alot of fans will be happy to see this small change brought back.

In Animal Crossing: Population Growing and Animal Crossing: Lets go to the City, town maps sometimes had cliffs with ramps which would add 'tiers' to your town. Animal Crossing: New Leaf was argued to technically have a cliff leading to the beach, but as you can see from the new trailer, cliffs throughout the town are now back. 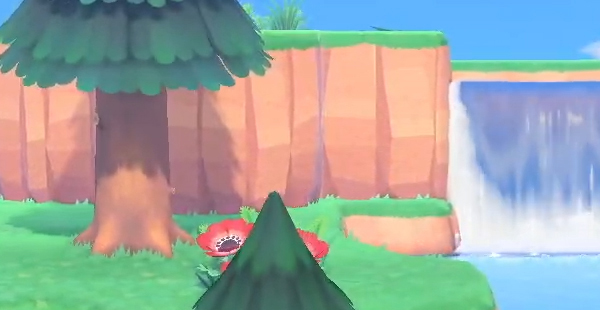 You can also see a cliff blocking the view of the horizon, so despite being an island based map, you wont be able to look into the distance at the top of your town. 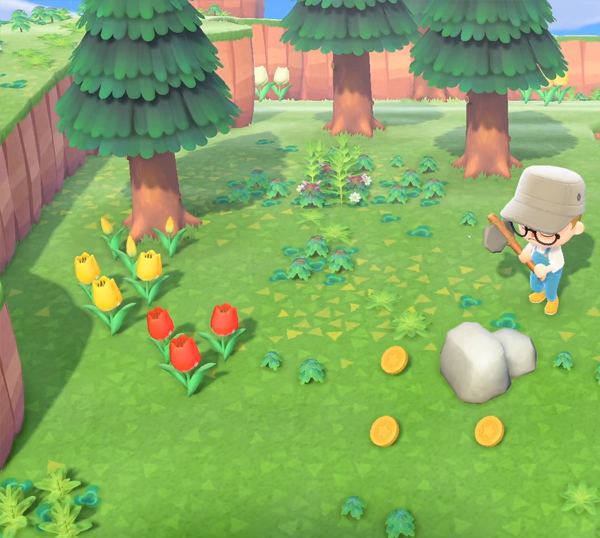 Whether Animal Crossing: New Horizons will have the elusive 3 tier towns like Population Growing did remains to be seen. This throwback is a welcome feature to the series which will add more depth to your town. You can also see from the trailer that the cliff wraps around on both sides and allows the beach to extend all the way up as can be seen here: 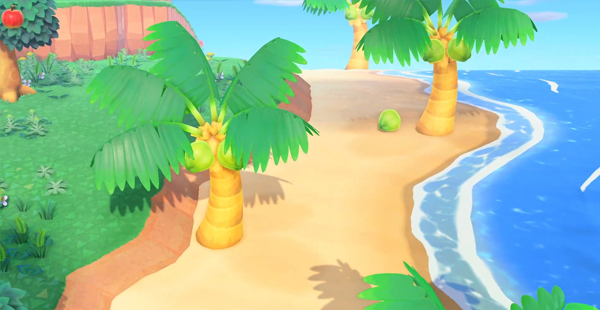 The map additionally includes what appears to be parting cliffs in the middle of the island (without any ramp to a second tier): 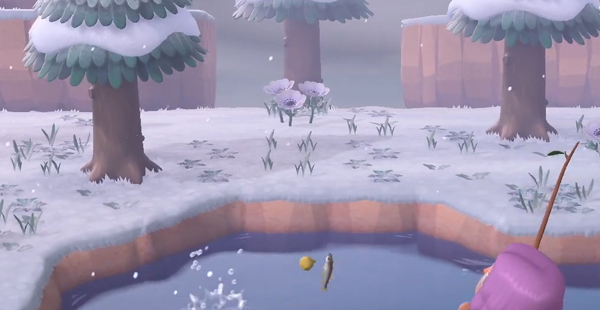 3. You can use bait to lure fish

In the new September Direct trailer, you can see the player cast bait out over the pier where no fish were previously. Its unknown whether this is a pier only feature or can be used in rivers as well but it is a welcome addition which'll save running around the map if you're grinding fish.

Additionally, the pier might either be randomly generated or a building feature you can choose where to place. It was explained in a recent interview with the creators that new buildings and options will be available as your town expands and develops.

A small but nice addition is the ability to create garlands out of flowers grown in your town. This paves the way for new clothing/accessories also possibly being able to be crafted with items. Now the game has a crafting focus, it wouldn't be too surprising to see this.

5. Tools & Furniture can be crafted instead of bought

A major new feature of Animal Crossing: New Horizons is the crafting system. By collecting stones, branches, wood and materials from around the island, you can craft tools and furniture which can be placed anywhere, outside or inside your house: 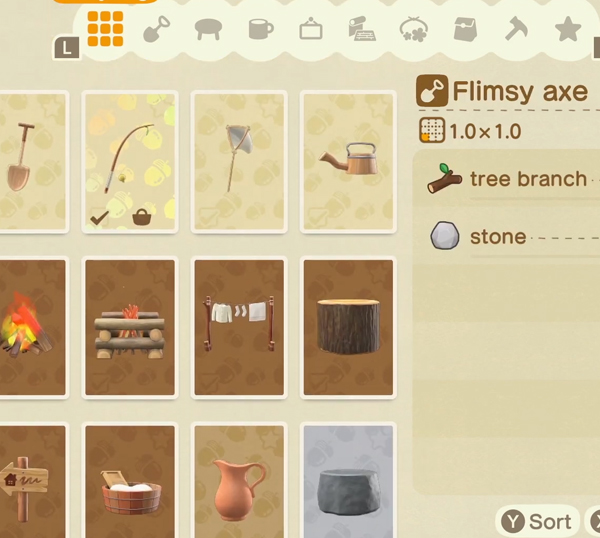 The Nintendo Treehouse gameplay showed us that you can now place items in half of a tile instead of full tiles.

Items can be crafted at Tom Nook's workbench inside the tent in the central plaza or what appears to be a custom made workbench later in the trailer which can be placed anywhere:

You can still purchase items normally from the shop called 'Resident Services' inside the tent, and sell any commonplace materials including weeds.

6. Your house (tent) can be placed literally anywhere (including the beach)

At the beginning of the game, you will meet with Timmy, Tommy and Tom Nook who will give you a tent. Instead of Nook following you around to choose a spot, you can navigate the town yourself and place your tent anywhere on the map. This includes the beach as you can see by the screenshot below which has never been seen before in the series. 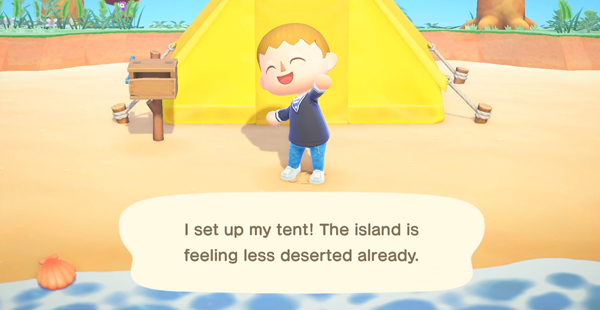 7. The weather system has small touches

There is alot of extra polish in the weather system including correct seasons depending on which hemisphere you live on ( north or south earth ). Alot of little graphical touches have been added as well including:

We now have screenshots of all seasons from the new trailer:

8. Map acres are back

Anyone who played animal crossing on gamecube will remember the acre system which split parts of the town. In the past this was used for technical reasons, to prevent stress on in-game loading times.

The new map has acre lines which divide up the town. This appears to be solely for making it easier to navigate the map at a glance but won't have any impact on gameplay. 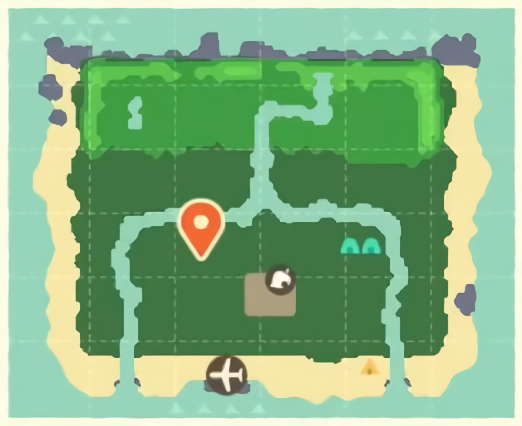 9. Fruit gives you energy to do special actions

The player is shown eating fruit which adds to an "energy counter" which allows the player to carry out specific tasks such as digging up trees and moving them: 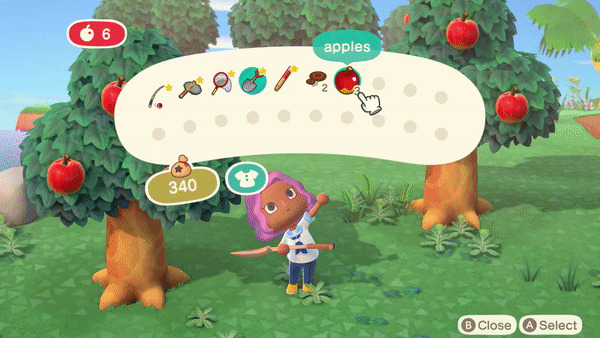 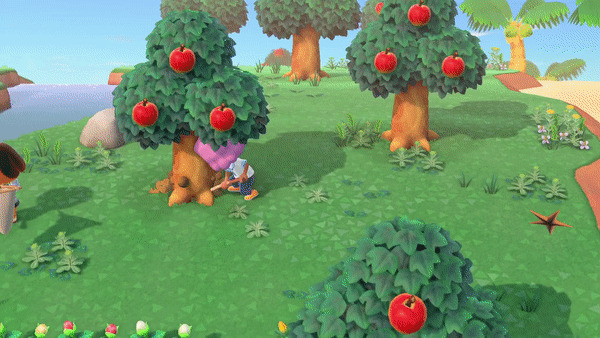 You get given a smartphone which contains a variety of apps such as: 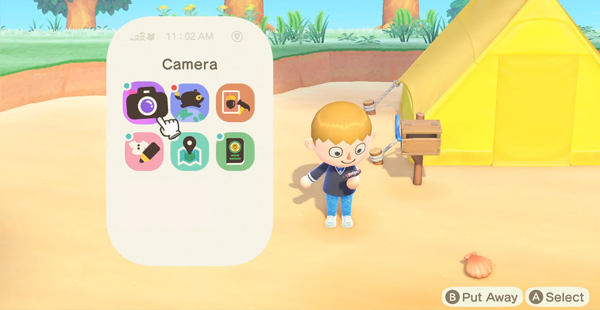 You can earn 'nook miles' for daily tasks you carry out and earn 'mileage' which can be exchanged for special items and recipes. 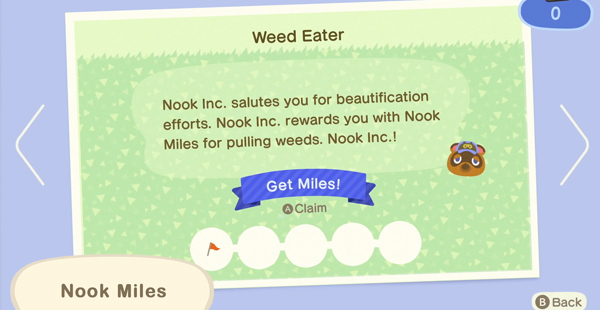 Some of these tasks include socialising with local villagers, fishing, bug catching, weed pulling and crafting.

12. Up to 4 players locally or 8 players online

With new hardware comes functionality that would've been previously impossible. For the first time in the series, you can play with up to 4 people locally on the same system or a huge 8 players online in a single town!

You can also temporarily pass over 'rights' to other players, allowing them to be able to place furniture in your town. This will prevent any players being able to drop furniture without your consent.

A long-standing issue with the series has been villagers placing their town wherever they like, possibly butchering a local garden you've made, destroying hybrids in the process or right in the middle of a path you've created.

It's confirmed that this will no longer be the case and new villagers will ask you where to live or move if they've settled in a place you're not happy with.

14. Doors can now have special patterns.

Special items or decorations such as christmas wreaths may now be placeable on your house.

A minor but cute update is that animals can now wear long sleeve shirts as seen by Wolfgang in the new trailer.

Animals can also sit on the ground as well as stumps and hold onto new items such as baskets which may be used at events.

That's all for our latest features in Animal Crossing: New Horizons! For all the latest animal crossing news, be sure follow Animal Crossing Portal and join our discord server to meet like minded players!